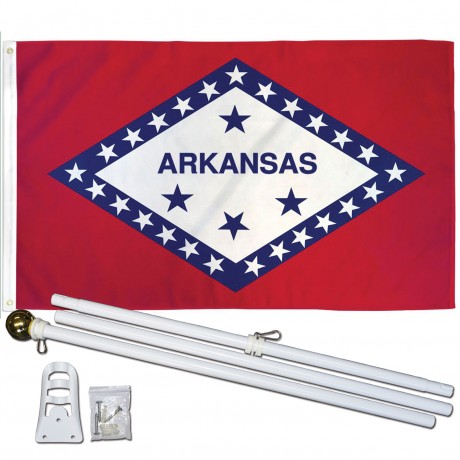 The Arkansas State flag in this kit is a 3' x 5' flag is made from a light-weight but durable polyester with an open weave reduces fabric stress and resists high winds. The polyester fabric looks like a coarse cotton, resists fraying and is designed for outdoor use. The bundle also includes a 6' white steel flag pole with mounting bracket and screws.  The white steel pole has a gold ball at the top and is equipped metal clips and can accommodate a flag with 2 grommets.  With everything in this kit you're read to set this up straight out of the box.

The flag of Arkansas is also a reminder of the Battle Flag with its blue diagonals and white stars and was created by one of the Daughters of the American Revolution, Miss Willie Hocker. The three blues stars in the center represent the three states that were created from the Louisiana Purchase of 1803, Arkansas included. The blue star above first appeared in 1924 and represents Confederacy. The twenty-five white stars are a reminder that Arkansas was the twenty-fifth state to be entered into the Union. The red, white, and blue colors of the flag represent both the Confederacy and the tricolors of France. Arkansas is the only state to have diamonds, which is the reason for its diamond shape in the red field. In 1967 the diamond was officially declared the state gem. 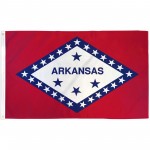 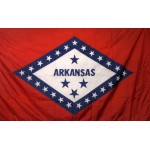 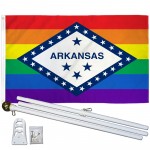